There are markets for residents and tourists markets, the covered market is open every morning except on Monday morning. Besides that:

Art City with a cathedral, old town and the Toulouse-Lautrec

Albi is located in the Tarn department in the Midi-Pyrenees. Geographically, Albi is on the border of the Massif Central and the plains of the River Tarn. Albi is through the use of red bricks in the house building, known as the "Red City".

The Saint-Salvi cloister church is the oldest monument of the city. Its construction began, before the Crusades against the Cathars, in Romanesque style, and was subsequently completed in the Gothic style.

In the eleventh and twelfth centuries there was much fought over by the noble warlords in and around the city over the supremacy of the region. The impressive cathedral and the adjacent Palais de la Berbie are impressive buildings. The powerful bishop Bernard de Castanet started to build the palace from 1260. Twenty years later, he staeted for the construction of the cathedral. Both are built to emphasize the posturing of the bishops power.

After the religious wars the non Catholic Cathars were overcome by the papal armies. Therefore there is a cathedral in Albi with a dual function: castle and church, so that no one would ever forgot the power of the Pope.

The church is situated with its back turned towards the city and overlooks the River Tam. The entrance is not located on the front side, but, in a wing which is in a refined different style from the rest of the sturdy brick fortress. Inside painters and sculptors of repute have used their talents to decorate the interior. In the tradition of the southern French hall church are the nave and the choir a unit. The defense duty that controlled the architecture, and the use of heavy material did not allow a wealthy appearance of the cathedral. However, the inside of the church is completely different. The church is almost everywhere covered with 15th-century frescoes, which are already in a Renaissance style.

Cathedraal Sainte Cécile - Built between the 13th and 16th centuries; the canopy and the singing gallery are the highlight of Gothic sculpture

Golf de Florentin - 18 hole course (par 71), in the middle of the Gaillac vineyards

Besides the cathedral, in the Palais de la Berbie, is a museum with works by Toulouse-Lautrec. This painter was born in 1864 in Albi. Meanwhile, the street where he was born was named after him. The painter Toulouse-Lautrec took his inspiration from the Parisian nightlife and alcohol. The in that time as experienced offensive scenes from the Moulin Rouge, where dancers and many other 'immoral' women played a leading role, have been collected in the museum. If his main characters were equally impressed by the artistic gifts of the Toulouse-Lautrec and the modern admirers, is questionable. The singer Yvette Guilbert scratched her criticism in a portrait, "You little monster, you have made me a very ugly man." By a muscular disease his legs were too short, so he was a short man. Despite his disability, he led such a turbulent nightlife that he died when he was only 37.

A large number of restaurants in Albi offers regional cuisine and wines, from neighboring town of Gaillac. Lovers of more international dishes can also visit Albi. The Cameroonian, Moroccan or Tunisian have secured a place in the Old Town. A simple pizza is also possible.

'Trendy' Albi was already in Roman times, but as a site to travel through on the banks of the Tarn. The construction of a bridge over the river, mid-eleventh century, reinforced the important role of Albi as a trading center for wine, clothing, pastel and metallic. The bridge, the Pont Vieux now called, has withstood the test of time well and is still used to cross the river. He is assisted by the Pont Neuf and a railway bridge. In the new district Madeleine, on the other side is not much to do except the Musée Lapérölgse and the beautiful view of the old town. From the viewpoints, the name "red city" is made clear: all the old buildings, including cathedral and palace, built of red brick which yielded the river abundant raw material.

Do not forget to take a walk through the old town of Albi where daylight covers the typical brick houses in warm ocher tones and changes in a blood-red decor at nightfall, where Albi her nickname "Red Village" owes. In the old town of Albi in each house of a significance has a sign which ​​describes the history of the property in three languages.
At the foot of the cathedral is a neighborhood that is sometimes overlooked. Until the 18th century it was an independent community. Since then, are the streets around the Rue du Castelviel the fairytale square and the cul Rue du Paradis are on the map of the big city. The inhabitants of the small Castelviel have no problem with that, because it's certainly not a shame to say that you live in Albi. 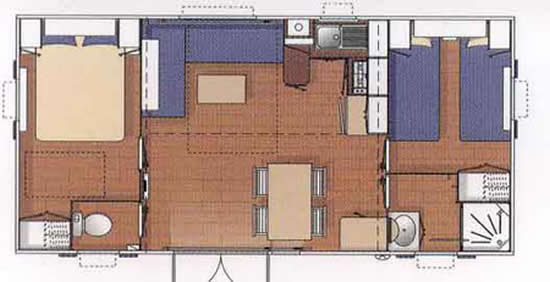